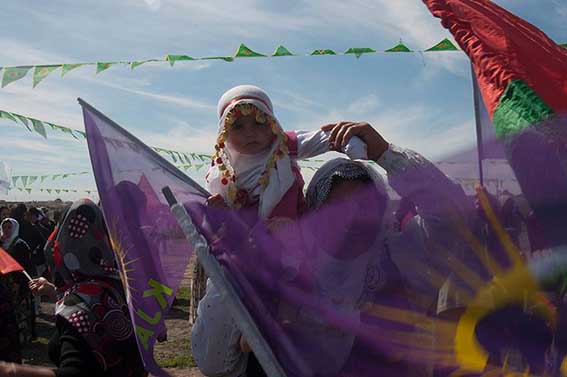 With the slogan “From Lisbon to Kobane  all women in march” six women from “Women’s Solidarity Venue  – Women’s Initiative Against Debt and Austerity Measures” set off on our journey to participate at the launch of the feminist caravan (4th international action of the World March of Women) in the city Nusaybin, a town in the Turkish Kurdistan at the border with the autonomous region of Rojava opposite the canton Jazira. In Rojava there are three cantons: Jazira, Kobane and Afrin. The launch of the feminist caravan from this area marked the solidarity of women while honoring the heroic struggle of the Kurdish women fighters against the violent and brutal attacks by jihadists (ISIS).

Affected by everything we had seen and heard throughout the previous period about both this great fight of the Kurdish female fighters and their attempt to create a new society from ‘below’, we arrived in the city Mardin on March 4 – two days earlier. Some of us – two women journalists among us – wanted to see, live and share more closely all these experiences of the Kurdish women.

So, during the first day, after we propagated the launch of the feminist caravan together with the comrades from Mardin, we organized with their help our visit to refugee camps in Diyarbakir (capital of Turkish Kurdistan).

First we visited the camp where more than 3,000 refugees live, the camp of the Yazidi – an ethno-religious group of Kurdish tribes – who lived in northern Iraq and had been victims of extreme brutality by jihadists (murders, tortures, kidnapping, rapes, sexual slavery) when the latter had conquered huge parts of northern Iraq. In the camp we had a detailed discussion about their life before the attack, the genocide they had suffered and about their plans – if one can speak of “plans” – for the future. Alarmed with their words “We do not want to go back. There is not nothing left there…”, we asked them to explain what they meant. The answer was “… we want to go to the West to tell the whole world what happened in our land, to inform them about us”. After that, we walked through the camp surrounded by children who were happy because they had visitors, we went into some tents and talked to some women about their lives before the attacks of ISIS, the genocide committed and the difficult conditions of life in the present. Though uprooted from their homeland, their tight faces showed how determined they were to continue this uncertain journey into the future.

Early in the afternoon we arrived in Diyarbakir. Accompanied by three young Kurdish women who spoke English, we went to a large sports center where Kurdish women from Kobane were hosted. Lots of women with babies in their arms came to greet us and talk with us. Those refugee women described their own personal experiences of the brutal attacks of ISIS on their areas. Central feature to all their narrations was the proud fight of their companions at the battle forefront. Shocking experiences uttered from lips tightened from the pain and tenacity to continue fighting until victory. The shocking stories all had a common denominator: the call for militant solidarity in the combat against barbarism and obscurantism. Full of emotion and with tears in our eyes – for our own common memories awakened with their stories – we hugged them goodbye…

March 6th. In the town Nusaybin – at the border with Rojava region, opposite the Jazira canton. The launch of the feminist caravan. The reception was staggering!!! Crowds of people, women of all ages, the elder wearing local costumes, young girls dressed in military uniforms, music, dances, slogans in the courtyard of an imposing building covered with the photos of Kurdish female fighters who had fallen in battles!!! Most of them beautiful young girls, all around us, smiling at us with a proud look…

During the forum scheduled, the main subject is the whole project attempted in Rojava. The topic: “Democratic Confederalism and Rojava Revolution under the leadership of women”. The room was packed with Kurdish women who had come from all three cantons of Rojava, local women and us, the women from abroad who had come to take part in the feminist caravan.

Both Kurdish speakers initially welcomed the World March of Women that supported their struggle launching the feminist caravan from their area. Then, they referred to the revolution attempted in Rojava through their struggle to create a different kind of society!!! As Yildan (YPJ) states in some parts of her speech: “We try, through self-management, from the bottom to the top, to give space to all, to create a society with many voices!!! We are building autonomy!!! We create social centres where all women, the minorities, have the opportunity to be self-managed!! We fight for the liberation of all women against the traditions and customs that restrict them!! The women involved in military organizations (YPJ) affect the changes undertaken in society. Women are trained in weapons and women fighters protect themselves and their homes, fighting against violence, but also fighting to win the “battle” for this different kind of society that is being built, in which women participate equally with men in positions of power and decision-making. This new type of organization of society is not political (in terms of politics of the ‘civilized’ West) but self-management with political content. In this, all together, Kurdish Arab and Assyrian women, we organize our lives and participate in the public sphere and this is an example for the rest of the world!! There are “Women’s Homes” where women can put all the issues that concern them – e.g. violence against women – and they can do the same to the whole community!!! There are educational and training courses in Academies on Diplomacy – where posts were held by men until now, but this is now changing with the participation of women even in this field – the Law, women’s studies, culture, history and women’s struggle, etc. We strive to change the old mentality!!!” Meize goes on: “The revolution in Rojava, is the first socializing process that a society creates, a democratic confederation, a multicultural, democratic society which allows for all nationalities to coexist and enables women to fight against patriarchy, those women who give their own “color” in this society being built!! The revolution in Rojava fights against the old to create the new!!!”

Other discussions in the same forum were entitled: «Ecology and Exploitation of Nature», «Discussions on Gyneology» and «Women’s Labour and All Forms of Violence Against Women». The next day, on 7/3 there was a massive vigorous demonstration – which brought together over 5,000 women – along the border with a simultaneous march of women from across the canton Jazira which resulted in two major aggregations!!! The women’s slogans and songs of women abolished the borders!!!!

On the same afternoon, five women from our group started with a mini-bus our trip to Sourouts, located on the border, five kilometers from Kobane. It was a long trip and we arrived at the refugee camp for Kobane people late in the evening. We decided to stay the next day, so a young couple of Kurds put us up for the night. I should not forget to mention that we received such warm and generous hospitality from those people all these days!! So, the dawn of March 8 found us in the camp “talking” with women and children from Kobane!! March 8, International Women’s Day, and we were sitting close to the women from Kobane!! Kobane, whose heroic struggle had been identified with women!!! Kobane, where a major effort is being made at the moment, not only to rebuild the place, but also to create a new society from below with the same determination and persistence, as is the case throughout Rojava!! Women are at the center of this effort. Despite the objective difficulties, all issues concerning them are open (equality, equal participation in politics, labour, knowledge and information about the history and struggle of women, motherhood, abortion, etc.). Even in the camp of refugees from Kobane there is a “Women’s House” in a tent, where women take part in training seminars on all of the above subjects. A political and social project in progress!!!!

Overwhelmed with emotion for those women who fight actual and symbolic battles every day and with whom we were able to communicate without speaking each other’s language but through the eyes, the gestures and especially the heart, we exchanged headscarves, hugged them and bid them goodbye, leaving our souls there as we set off.

Arriving at the border and seeing Kobane right across in front of us, we were informed that we could not get in and the excuse of the Turkish authorities was the paperwork required … However, we went on and approached as close as possible, because we wanted to send a message: “We’re here!!! With you!! Hang in there!!! Keep the good fight until the final victory!!!”. And then two strong explosions were heard, the one – the most powerful – followed by smoke. The people who escorted us informed us that it was missiles and shells exploding and that the whole area was covered in them as well as in mines, left behind by jihadists. We visited the small village and the museum with pictures of the dead men and women fighters who had fallen in battle…

Taking the road back and reaching Sourouts, we faced a massive militant demonstration. A lot of people on the street, men, women, children, holding flags, shouting slogans loudly, with raised hands, faces determined!!! We heard gunshots in the air. Our mini-bus stopped and we found ourselves among the crowd… We learned that men from  PKK and YPG were bringing two dead fighters from Kobane and the people were accompanying them to their homes with such a militant demonstration with raised arms showing the sign of victory !!

THERE IS NO MOURNING IN KOBANE!! ONLY DETERMINATION AND FIGHT UNTIL THE FINAL VICTORY!!

We arrived late at night in Diyarbakir where a large militant and massive demo had been completed!! March 8, 2015: the feminist caravan – the 4th international action of the World Women’s March was starting its long journey!!!